Ilhan Omar is one of the most outspoken critics of Donald Trump.

The Muslim Congresswoman is spearheading the effort to impeach the President.

But now she could end up behind bars because of this disturbing crime.

Ilhan Omar is a constant presence on social media.

The radical leftist often finds herself on the wrong end of the news cycle because of her anti-Semitic tweets.

Omar tried to win a social media exchange when she picked a fight with Florida Congressman – and pro-Trump stalwart – Matt Gaetz.

Gaetz had tweeted that the world would learn the truth about Michael Cohen’s shady past and dishonesty when he testified before the House Oversight Committee. 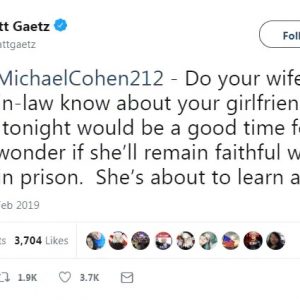 Gaetz deleted the tweet because he did not want the controversy surrounding accusations of witness-tampering to overshadow the real story: that Democrats were turning over the House of Representatives to a convicted felon.

Omar fired back at Gaetz by citing the witness-tampering statute.

But Omar stepped on a rake with that tweet.

Multiple twitter users replied by posting the statute for marriage fraud, which states:

8 U.S.C. § 1325(c). Marriage fraud: “Any individual who knowingly enters into a marriage for the purpose of evading any provision of the immigration laws shall be imprisoned for not more than 5 years, or fined not more than $250,000, or both.”

This raised the specter of an ugly scandal from Omar’s past.

During her 2018 campaign, conservative activists claimed she committed immigration fraud by marrying her brother.

Critics accuse her of staging a fake marriage so Elmi could gain quicker access to U.S. citizenship.

Omar denied all accusations that she married her brother.

But because she and Elmi refuse to allow any documents surrounding the immigration proceedings to be made public, the accusations continue to swirl around her.

It’s hard to tell which scandal is more serious: her history of anti-Semitism or allegations of marriage fraud.

The alleged marriage fraud gets little to no attention in the so-called “mainstream” media.

The Associated Press picked it up during the campaign.

But now that Omar is in office, political reporters won’t go near it with a ten-foot pole.

For all the talk of “accountability journalism” in the era of Donald Trump, there is none when it comes to Democrat Party scandals.

The real truth of the matter is the media only adopted the mantle of “accountability journalism” so they could rip off the mask of supposed objectivity and be blatant Democrat Party activists.

That’s why whenever it comes time for the media to “take a side” in a story, it always lines up with the liberal agenda.

This also goes for what stories they don’t cover by refusing to devote time and resources on reporting them.

We will keep you up to date on any new developments in this ongoing story.